Ferozepur, October 24, 2019: Today, Rural Pharmacy Officers expressed their resentment by tying black ribbon on their arms seeking regularization of their services for the past 13 years.

Earlier they sat on an indefinite strike in Patiala, following which the government assured to give them basic pay. However, nothing concrete has been done so far.

He said, there are around 1186 rural health pharmacists in Punjab including 44 in Ferozepur in the age group of 30 to 45 years and majority of them have crossed the limit for posts in government.

They said, it is very unfortunate that when 1186 each Rural Medical Officers – RMOs and Rural Health Pharmacists – RHPs were recruited in 2006, by shifting them in Panchayat Department –n only 1186 RMOs were regularized in 2011 and RHPs were given a step-motherly treatment who continued to work on contract basis.

It is discrimination with the rural pharmacists for not regularizing them.  On the one hand, the government talks about providing the best health services in the rural areas whereas on the other hand playing a mockery, by giving meager wages of Rs.9000 per month.

He said, we have decided to show resentment towards government by wearing black ribbons on arms while working to avoid any inconvenience to the patients in the rural areas.

Giving a warning to the government, he said, in case the services of RHPs are not regularized, we will intensify the agitation at the state level by gehraoing the houses of Capt Amarinder Singh and Health Minister, Bajwa. It will be ‘do or die’ fight now, he added. 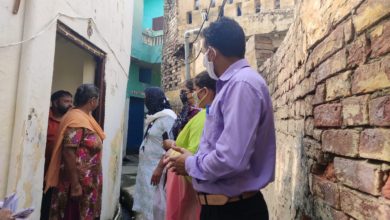 Threat from inmate – a question mark over jail authority’s role