Congress and Akalis are playing fixed match in Punjab : Brar

I have not jointed the AAP but I like the ideology of AAP.

Don’t want to make a separate party to divide the votes to give benefits to the Congress and Akali Dal.

Instead of contesting election, I will campaign for a change but will not become hurdle.

Politics in Punjab is confined to royal families and dynasties : Brar

Ferozepur, August 29, 2016: Jagmeet Singh Brar, former Congress leader today had a press conference at Ferozepur, under the Pehla Punjab Lok Hit Abhiyan initiated in 22 district of the State, with focus of first priority on Punjab and its welfare as first priority.

It is pertinent to mention that Jagmeet Singh Brar former Congress leader amid lukewarm response had kicked off Pehlan Punjab Lok Hit Abhiyan started from Mandi Gobindgarh without representing any political party as iron and steel industry have shut down due to wrong policies of SAD-BJP.

Addressing the media persons, Brar said, Punjab is in great agriculture crisis in Punjab as around 3 lac farmers have committed suicide since 1997 and none of the government from time to time at the Government of India and State, have so far taken any steps, to solve this problem.

He further said, for the last five months, after Chappad Chiri Conference, we are seeking Ordinance from the government, by visiting all the constituencies of Punjab like Land Acquisition Act for keeping the wheel of development of the country moving, which came into existence only after introducing seven times to put a check on the suicides by the farmers and agriculture crisis. The only solution to this problem is that attachment of hosues and landed property should be stopped and bringing  improvement in the banking infrastructure by deferring the recovery for another three years by stopping he accumulation of interest on interest.

He further said, we are preparing a draft of the ordinance with the assistance of legal experts to bring the farmers out of the agriculture crisis for which I had already made an appeal to the GoI,  that senior official from PMO Minister, Agriculture Minister and Finance Minister to come out with a solution by taking the appropriate action jointly.

He also said, on September 7, the farmers organizations in India have decided to gehrao the Punjab Vidhan Sabha, to register their protest to come up with solution to the problems of farmers through a law or ordinance at the State and Centre levels.

Attacking on Akalis and Congress, Brar said, for the last three months he had been reading the hoardings of the political parties – Congress says – Chahunda Hai Punjab, Captain Di Sarkar, which means that the Congress party which has 130 years of history is out from all the hoardings and policies and it looks as if the politics has become the victim of individualism in Punjab.

On the other hand, Parkash Singh Badal says “Raj Nahi, Seva” asking to give us another opportunity.  Sukhbir Singh Badal is also appealing to the youths as an individual instead of Akali Dal government.  Perhaps, this is the first time in the history of politics that two major political parties are not asking votes on behalf of the parties but as an individual.

Attacking on both these parties – Jagmeet Brar said,  three members each of both Congress and Akali Dal, have accounts in the Swiss Banks, he said, it is not me, but the Enforcement Directorate, who have seized their passports and they have to take special permission to go out of the country. In fact, the politics in Punjab is confined to royal families and dynasties.

Talking about having support of all the communities in this border town Ferozepur, he said, I am not talking now rather for the last 40 years since my induction in Parliament in 1992,  the issue Punjab waters, 1984 riots issue, inclusion of Rai Sikh in SC category was first time initiated by me, on 29 April 1993 in Parliament, apart from having the contribution of other leaders also.

But still, the development of border, development board, compensation to the people, employment, infrastructure, school, health issues are still alive which needs special attention.

More than  30 percent weaker sections people are living and they have never got the opportunity to serve in Punjab at the first place  in political meetings and only handful of persons have been presented while rest are being kept busy in atta-dal schemes, he added.

It is our earnest desire that the biggest condemnation against should be from the land of Punjab where the ‘gurus’ have and I am hopeful that the social campaign started in this context would bring results.

Making it very clear to the party that number one enemy of Congress and Akali Dal in Punjab is Aam Aadmi Party, I repeat, both the parties are talking against the AAP.

Condemning the statement of Sukhbir Singh Badal that AAP is getting funds from the radicals, he said, Badals apart from getting funds in crores from abroad, too have earned huge funds from selling drugs, capturing the transport, sand business. Thus, Badals have no right to ask Rajnath Singh to enquire into the collection of funds against one particular political party.

Despite having different ideology of Akali Dal and Congress, similar statements are coming against the AAP.  In case the AAP is the biggest opposition party of Congress and Akali Dal in Punjab, then I today oppose both the parties as they have played a fixed match in the politics of Punjab.

Brar also made it clear that the biggest allegation of today is that in Talwandi Sabo bye-election, Captain and Badal had  compromise and similarly in Khadoor Sahib elections.  Capt bail out Parkash Singh Badal during Khadoor Sahib elections by not fielding the candidate and this is the main reason of starting of  my differences with the Congress leaders.

In reply to the question, Brar denied having intention to join the Aam Aadmi Party and I will support any party or person with good ideology. There is no confusion in our mind and only one agenda is  only to oust the Akali Dal and Congress by rooting out from Punjab and but I will try to bring all the Punjabis on one platform on this issue so that the government in Punjab is not like of friendly matches.

To another question, he said, on a call from AAP, I will present my ideology before joining.  However, I don’t want to make a separate party to divide the votes to give benefits to the Congress and Akali Dal.

On asking about of his close associate – Manjeet Singh Jhalbhuti returning to the Congress, he said, he was with me for 30 years, has not cheated with me  but for with himself.

On SYL issue, he made it clear that I had taken up this issue since 1994 and have said number of times in the Parliament that if we have surplus water, it should be given to other State, as the Country is one. We don’t have surplus water to share now, this is the problem.

To another question about the persons sitting beside him, who have recently joined AAP quitting from Congress, will continue to support in the coming future, he said, we have made 22 coordinators districts in the State and we will associate more people in the rural areas and in Ferozepur being a very important border district and today we have appointed Gurbax Singh as Coordinator.

Presently I don’t have any dialogue with any party, as such the question of contesting elections does not arise. But, it is a very small thing to contest the election for Brar, the question is only that we want a change.  I will campaign for the change but will not become hurdle.

To another question, he said, on a call from AAP, I will present my ideology before joining.  However, I don’t want to make a separate party to divide the votes to give benefits to the Congress and Akali Dal. I have not jointed the AAP but I like the ideology of AAP. 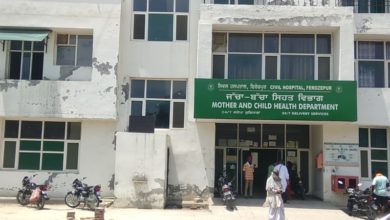