Ferozepur, February 23:  The BJP-SAD alliance has fielded candidates in all 31 wards following the seat sharing formula. Two candidates have been elected unopposed. In ward number 21 Charanjit Kaur of SAD in ward number 13, BJP Candidate Mandeep Kaur have been elected unopposed. It is pertinent to mention here that Mandeep Kaur’s husband Parminder Singh had won the last election as BJP candidate but had joined PPP later. However, this time he rejoined the party.

BJP has fielded 23 Candidates and SAD has fielded 8 candidates under the seat sharing formula while the congress could manage to field candidates in 26 wards only.

Reportedly, the independent candidates during Municipal Council polls scheduled for February 25 are going to give neck-and-neck fight.  As the poll campaign comes to an on February 20, door-to-door canvassing is at its peak even at late hours corner meetings but the tension among the candidates is rising. It is Independents versus SAD-BJP candidates in most of the wards as Congress has just completed the formality by fielding its candidates and taken the backseat whereas AAP had already decided not to contest the MC polls.

After withdrawal of nominations, 165 candidates, 270 candidates are in fray for MC polls in 31 wards of Ferozpepur.  In two wards, the candidates of two wards – No.13 Mandeep Kaur of BJP and No.21 Charanjeet Kaur of SAD – have been elected as unopposed and in the remaining 29 wards 99 candidates at Ferozepur.

No political party has released its specific manifesto and the candidates are mainly depending on people’s goodwill.  They are hardly talking about the specific issues of development but using their personal influence to woo the voters.  Both, Congress and BJP are facing infighting problems. The Congress leadership is facing huge criticism after the denial of ticket to DCC Vice-President Praveen Kumar Khattar aka Raju Khattar, who later not only resigned from the congress, but also openly started supporting BJP Candidates. Sources say, his rebalance can cost dear to the party at least in 3-5 wards.  Praveen Kumar has leveled serious charges against the party leadership and his departure has left the congress’s prospectus of winning these civic polls hanging in balance.

Infighting between the BJP could be seen as the local former CPS and President, Punjab BJP have not been seen at one platform to support the party candidates but both are supporting their candidates independently. Few days ago, the BJP Mandal Vice-President Manish Sharma joined Congress due to indifferences with the party leadership. His wife Yamini Sharma is contesting from ward number seven. In ward number 22 the BJP has announced  Sakshi Khurana  wife of Rajesh Khurana as the BJP Candidate. Rajesh Khurana, who enjoys a close proximity with Sukhpal Singh Nannu, Ex-MLA had announced himself as the BJP candidate, giving an indication to the party high command. However, after few behind door meetings, his ticket was confirmed.

Ward No.1, the wife of Ulfat Rai, sitting Congress MC is giving a tough fight to BJP candidate Rabia being a woman ward.

Ward No.2, Ashwani Grover, former President MC on BJP ticket is trying his luck against Satya Pardhan on Congress seat.

Ward No.4, The fight is between BJP and Congress. Kamla Rani wife of sitting MC Ravi Mehta is the BJP candidate while Rachna Malhotra.

Ward No.6, Navjot Singh Pinki of Congress has put in trouble in a contest with his nearest Akali candidate Balihar Singh.

Ward No.11 Ashok Sachdev of BJP is having a upper hand over Satnam Singh Congress candidate despite two candidates Angrej Singh and Jaspal Singh also in race as Independent.

Ward No.16 Ravinder Kaur of BJP has a direct fight with Congress candidate Parmajit Kaur Handa when three Independent candidates are also in line.

Ward No.22, the direct fight is between BJP candidate Sakshi Khurana and Dev Bala Congress candidate in this woman ward.

Ward No.26, Gurpreet Bhullar SAD candidate is against Nirbhay Singh Congress nominee from this ward.

In the reaming wards, BJP candidates are having upper hand in most of the wards while in certain wards, the tough fight is seen against the Independent candidates who have denied the party tickets or declaring of woman wards where they are enjoying the support of their husbands being sitting MCs. 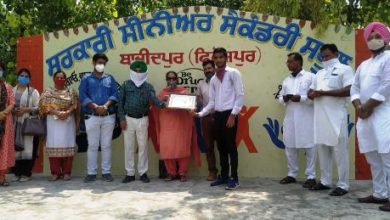